J. Milo Sewards, MD, FAOA, FAAOS, has been named Chair of the Department of Orthopaedic Surgery and Sports Medicine at the Lewis Katz School of Medicine at Temple University, effective January 1, 2022.

“A member of our faculty since 2008, Dr. Sewards is exceptionally qualified to lead the Department of Orthopaedic Surgery and Sports Medicine at the Lewis Katz School of Medicine,” said Amy J. Goldberg, MD, FACS, Interim Dean and George S. Peters, MD and Louise C. Peters Chair and Professor of Surgery at the Katz School of Medicine. “His superb clinical, educational and administrative skills, and broad-based demonstrated leadership at Temple, in professional affairs, and as a Captain in the Navy Medical Corps will be of great value to our school — further strengthening an already highly accomplished department.”

Dr. Sewards completed his orthopaedic surgery residency at Temple and joined the faculty in 2008. For the past 11 years, he has served as Program Director of the Orthopaedic Surgery Residency at TUH, for the past five years, has been Chair of the Graduate Medical Education Committee of TUH, and served as Chair of the Admissions Committee at the Katz School of Medicine from 2016 to 2019. He has also been a team orthopaedic surgeon for Temple Athletics. 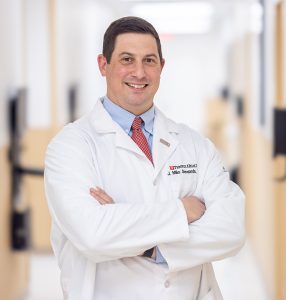 Between his residency at Temple and joining the faculty in 2008, Dr. Sewards spent three years in the U.S. Navy as an orthopaedic surgeon. He remains active in the U.S. Navy Reserve and was deployed twice to Expeditionary Medical Facilities — in the Horn of Africa in 2008 and in Iraq in 2018. In recognition of his leadership and more than 20 years of service, he was recently promoted to the rank of Captain in the Navy Medical Corps.

The Value of AOC Connect

“Being a part of the AOC has been invaluable as I have stepped into leadership roles in my career. As a residency program director, I often referred to the AOC reports and Best Practice Presentations, but I can’t emphasize enough how helpful the Leadership Presentations were in preparing me to step into the job as the Chair at Temple.”